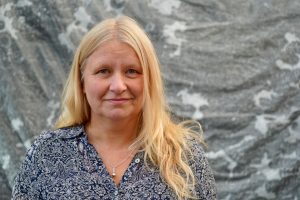 My vocational background is mainly as an elementary language teacher in ages 10-15 but I have worked within the whole spectrum of ages and stages as well as subjects during my 15-17 years as a practicing teacher. In 2012 I was appointed as project manager for a governmental initiative within the municipality of Luleå aiming at increasing the inclusion of Roma people in society by counteracting discriminating structures within the organisation. That led me to writing a master thesis analysing the subject positions offered Roma people both historically and in present days where my empirical material consisted of a White Paper presented by the Swedish government in 2014, describing abuse and violations towards the Roma people in Sweden in the 20th century.
In the fall of 2018 I started my current position as PhD in Educational studies at Umeå university looking closer at online Sámi language K-9 education within the Sámi National Board of Education. Besides being a part of the national graduate school for digital technologies in education – abbreviated GRADE, I am also a part of the Post Graduate School for Educational Sciences at Umeå university.
As belonging to an indigenous minority myself, as the Sámi people are, my main interests concern governing factors behind different structures, phenomenon and practices. I want to know why things are conducted the way they are, the rationales and imaginaries behind the decisions made. Power structures always lies in the background as a basis for that kind of questions, almost impossible to avoid, which results in me always coming back to those kind of questions in one way or another.